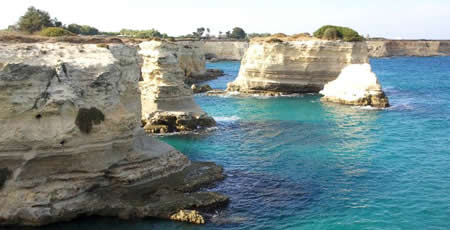 During this tour, we will visit the northern coast of Otranto. We will reach Mulino d’Acqua Bay first, to visit its caves which are all connected by a small tunnel. Going on, we will visit the cove of Club Med, with its holiday village and its small sandy coves; immediately after, we will reach Baia dei Turchi (literally “Bay of the Turks”), so called after the landing and invasion of the Turks through this bay occurred in 1480. Finally, before reaching our final destination, Sant’Andrea, one of the ten most beautiful places in Italy, we will cross other suggestive bays such as Baia degli Alimini, so called after the name of neighbouring lakes of brackish water, and then Conca Specchiulla and La Punticella.