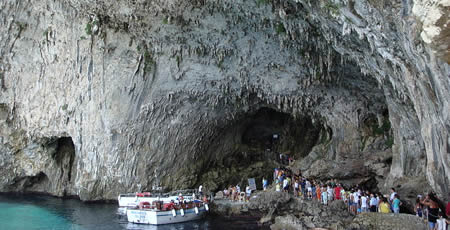 During this tour, we will visit a stretch of coast between Otranto and the cave named “Grotta Zinzulusa”. After departing from the port of Otranto, our first stop will be a bay called Baia delle Orte which stretches from Punta Facì to Capo d’Otranto, the easternmost place in Italy. Continuing our trip, we will reach Torre Sant’Emiliano, so called for the presence of a tower originally built in the 16th century and that was used for defensive purposes after the Turks’ incursion. In the 50’s, an English ship sunk offshore this bay. Going on, we will find Porto Badisco (hamlet of Otranto) a small fishing village, a well-known port which is believed to be the first landing spot of Aeneas in Italy, as narrated in Virgilio’s Aeneid and also for the crystal clear water of its sea through which the sea bed can be perfectly seen even at a depth of 10 meters. Later on we will arrive to La Fraula, name which comes from the Arabic word for “strawberry”. In this bay there is a cave characterized by the presence of many fresh water springs; to locate them, just place your fingers on the numerous rock cavities and you will feel immediately cold water flowing out from many of them. Continuing for about 5 km, we will reach Santa Cesarea Terme, a really pretty seaside town, well-known for the onion-shaped dome of Villa Sticchi, built between 1894 and 1900. Going ahead along the coast, we will find another nice cove, Porto Miggiano, characterized by a steep cliff, a small beach and wonderful crystal clear waters. Finally, we will get to the famous cave, Grotta Zinzulusa, situated under the town of Castro